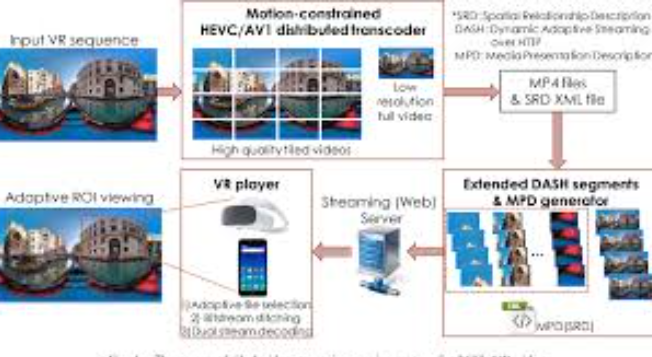 360° Virtual Reality (VR) services with resolutions of 8K and beyond are a challenging task due to limits of both decoding complexity and constrained public internet bandwidth of consumer devices. Also, general streaming servers cannot service these large-resolution video streams to many clients because of bandwidth limitation. In this paper, we propose a distributed video transcoding system for achieving viewport adaptive streaming, which is known as tiled streaming, of 8K 360° VR video. The proposed system consists of many motion-constrained High Efficiency Video Coding (HEVC) encoders, a Hadoop/Spark-based distributed computing platform, light-weight bitstream stitcher, and dual HEVC decoders. Experimental results show that 8K 360° videos which are split by 8×8 tiles, respectively, can be encoded at 99 fps, and 4×4 tiles are stitched at 9,585 fps, on average.