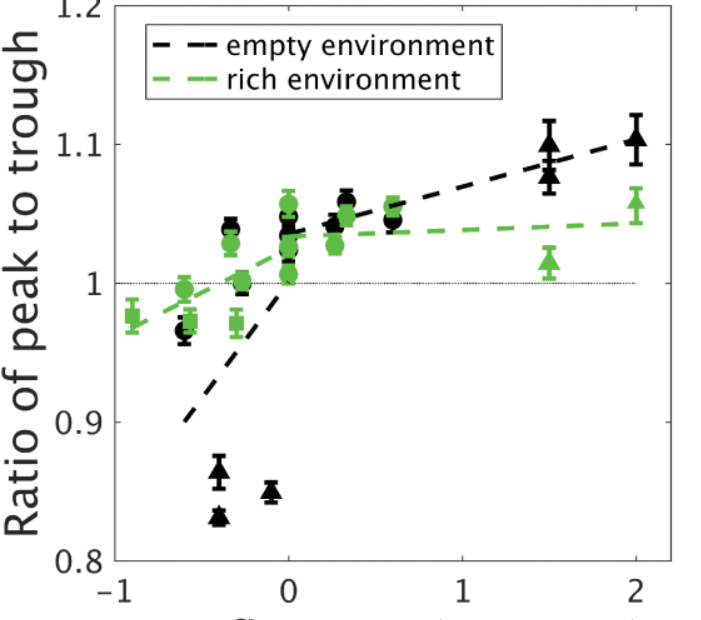 Viewing a scene on a screen display differs greatly from viewing it in the real world. The visual information is conveyed via a flat screen at a fixed distance, and this screen distance can influence how viewers perceive depth in stereograms in conventional stereoscopic displays. This study investigated whether screen distance influences perceived depth in Virtual Reality (VR) systems providing additional motion parallax information. Participants adjusted the depth of a vertical dihedron displayed as a random-dot stereogram. In a first experiment, the stimulus was presented either alone in a gray untextured background or in a cue-rich environment. We found that despite the extra motion parallax information in VR systems compared to conventional stereo-displays, physical screen distance still affected depth perception substantially at longer simulated distances. However, the effect lessened when observers were immersed in a rich and structured environment, possibly allowing them to use other depth cues. A second experiment assessed the influence of potentially potent display-related factors (resolution, display orientation, luminance non-uniformity, and specular reflection), as well as the effect of accommodation-vergence (A-V) conflict size. Depth perception was compared between a Head-Mounted Display (HMD) and an L-shaped system, and between a CAVE and an L-shaped system. These comparisons between CAVE-like VR systems and HMDs revealed that A-V conflict and inclusion of a rich environment were the major factors impacting depth perception. These results have practical and methodological implications for the reliable use of VR systems, especially where accurate depth-matching is involved.