PDF: Study on the Comparison of the Difference of Reaching Between the Real and the Virtual Environment Using HMD 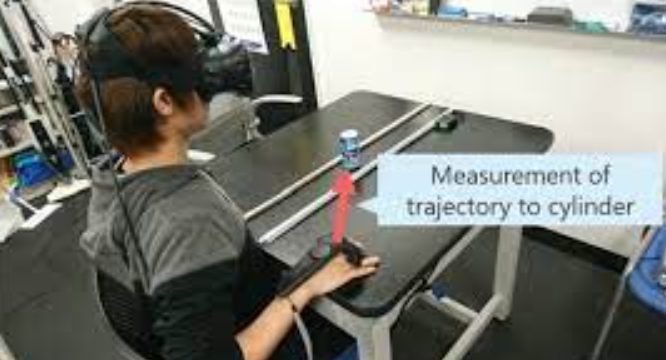 The purposes of this research are to investigate a difference of human cognitive behavior (in other word, ecological cognition) in VR using HMD and the real environment and to examine a method to compensate the difference. Therefore, this research conducts a comparative experiment using a cognitive behavior called “Reaching”. First, a subject estimates the longest distance to a cylinder placed in front of the subject at which the subject can reach the cylinder. After that, the subject grabs the cylinder and places it as far as possible. The result is investigated in the real and the virtual environment. In the real, it has been found that the longest distance to an object for a person to decide to be able to reach for and grab the object is about 1.1 times as long as the longest distance where a person actually can reach for grab the object. On the other hand, despite the same scale of the real and the VR environment, this research showed the value in the virtual environment is not the same as one in the real. In addition, the result of measuring the trajectory of grasping the cylinder also showed that there is a difference between the real and the VR environment. As the result, it was found that there is an essential cognition difference between the real and the VR environment, and it was shown that the amount of environmental information and experience of the virtual environment may influence the ecological cognition in the virtual environment. In addition, as a method to complement the difference, it was suggested that it is necessary to give sufficient information to cognitive behavior.