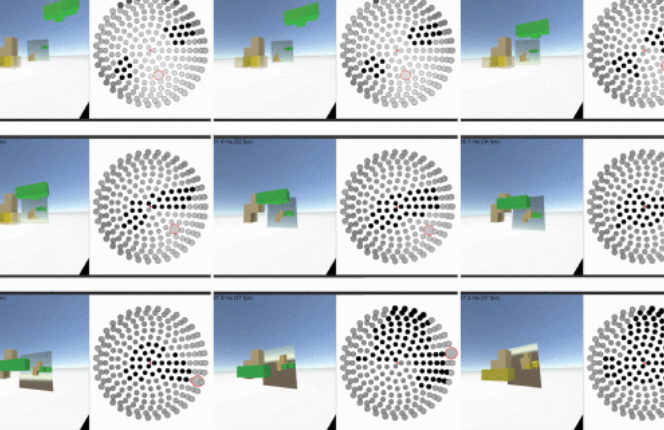 Popular virtual reality systems today allow us to experience highly immersive applications in which virtual objects are realistically perceived via stereoscopic displays and can be directly manipulated based on hand-eye coordination in a very similar way as in the real world. However, the insufficiency of sensory feedback as well as the limited degrees-of-freedom of input motion still hinders precise and elaborate manipulation in virtual reality. Aiming at more precise 3D manipulation, we present a new method of extending the user’s spatial perception ability with the `virtual mirrors’, which expose the hidden spatial information of given virtual scenes to the user. The movement of a virtual mirror is automatically controlled by solving an optimization problem iteratively, in which the objective function prefers the placement of the mirror that can highlight the spatial relationship between the manipulated object and the object nearest to it. The optimization process is handled efficiently for each time step based on our method for finding the closest gap between any two objects based on the OBB (oriented bounding box) trees and our sampling-based approximate approach to the optimization problem. The usefulness of our method is demonstrated by several pilot applications under various usage scenarios, such as assembling construction toys and solving 3D dissection puzzles. The quantitative results of our user study show that the virtual mirror is very helpful in increasing the precision in 3D manipulation tasks in virtual reality.